Plenty of snow in Les Arcs - another disastrous season?

It's not been a bad winter so far in Les Arcs. Regular falls of snow and relatively low temperatures have resulted in some of the best top-to-bottom conditions I have seen here in the last decade. Even a day of heavy rain at the end of last week was followed by another 10cm of snow that same night, further consolidating the snowpack in preparation for the substantial snow showers forecast for the next few days. The lifts and pistes of Paradiski have been  pretty well 100% open since December.

Les Arcs and the other large, high-level ski resorts of the Alps, will be hoping for a big thaw, rise in temperatures and closure of low-lying pistes and  lifts before the French school holidays begin next week. A few more days of rain followed by a warm sunshine would be perfect!  Lift ticket sales have remained static for the last couple of seasons, but there's every sign they might be lower this year because of all this snow, as well as the general economic malaise to which the ski industry is becoming susceptible. 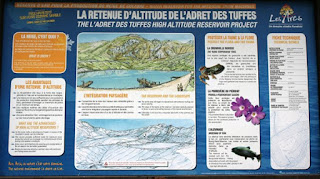 This doesn't make sense, I hear you saying. Surely snow is what makes money in a ski resort, the 'white gold' as they used to call it in the glory days of the 60s and 70s.  Well, the problem is that in a 'good snow' winter the indigenous population will head for the lower, family-friendly resorts that are dotted around Savioe, the Alps and other mountainous regions of France. These resorts may be quite low, typically between 1200m and 2000m, with only a handful of lifts and pistes, but the price of the lift pass, accommodation and nourishment will be significantly lower. Most people taking children on a skiing holiday don't actually need 600km of pistes and 200 lifts to have a good time. Small ski stations in the Jura, Vosges and Massif Central make a point of offering an authentic, welcoming ski experience, focussing on good value and 'traditional' holiday values.

Ironically the 'mega-resorts' have invested massively in snow making networks to protect their revenue in 'bad snow' years. For example, at Les Arcs more that 40% of the pistes are covered, and a few years ago the huge Adret des Tuffes reservoir was constructuted in the Arc 2000 valley to provide 400,000 cubic meters of partly gravity-fed meltwater to the snowmaking network.

Such projects are very expensive, and many resorts now use as much electricity making snow as they do for running the lifts.  All this leads inexorably to rising prices for the consumer - the skier. Lift passes rise year on year, and for the first time ever this year I noticed a figure greater than €1000 euros appearing on the Les Arcs Price list (6 day Paradiski family pack, €1017 euros). Even the cheapest 6 day adult pass is now €225 euros - compare that to the popular family resort of Metabief - Mont d'Or in the Jura (20 lifts, 42km of pistes), there the same pass costs less than half, at €109 euros.  As a father of 3 myself, I would certainly be considering somewhere like this for my family if I wasn't already rooted in Les Arcs, much as I love the place!

At the peak of the 'credit crunch' (the winter of 2008/9) Les Arcs saw a 4% fall in lift pass sales. Not much perhaps, but if that goes on for 10 years it would be the end of the business. Not that the smaller resorts themselves are in anyway immune from the same economic pressures. Yesterday's local paper carried an article about 'Ghost Ski resorts' (english version on PisteHors.com)', adding  Drouzin Le Mont to the lengthening list of village resorts closed or abandoned in the last few years. The best know example of these is Abondance, in the Portes de Soleil domaine. Briefly rescued by an American millionaire a few years ago, the future of this pleasant cheese-making village as a ski resort is once again looking dubious.

Perhaps now I should mention global warming. I have skied in France during every season for the last 25 years, and I'm not sure myself whether le réchauffement has really has had much effect on the skiing business yet, compared to other factors such as the emergence of snowboarding (more on this another time).

Economic, political and social issues (couch potatoes don't do skiing....) are still the major factors determining the success or otherwise of a ski resort. This view is echoed by Laurent Reynaud, director of the French ski areas association (quoted in the article cited above):

" The fragility of ski resorts is not just down to climate change but also their structure. Those who had the foresight not to invest in cable cars and gondolas are doing okay. Managing costs is the key. Take the small resorts in the  Vosges for example, equipped mostly with drag lifts: they are maintaining their market share.”

Perhaps Les Arcs had better watch out!
Posted by Ski Adventures at 6:14 PM