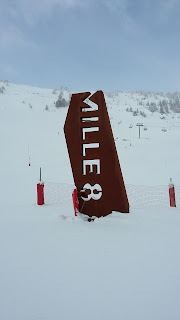 I've been asked the questions 'What's (a) Mille 8?' quite a few times since the season begun, and I realised I didn't really have an answer except  to recite a list of the new features incorporated into Les Arcs new, much-hyped offspring: toboggan run, swimming pool, some odd wooden huts, a short bump run, and so on....

So I decided it was time to take a proper look and talk to some of the people involved in Mille 8 to try and understand not only the concept but what it brings to Les Arcs and its visitors. Is it really the 'new space for novel experiences' claimed by ADS, or is it an over-hyped attempt to stimulate a stagnating market?

The origins of the Mille 8 stem from the '4 'till 7' problem that many major ski resorts have tried tackle in the light of decreasing revenues from lift pass sales and ever increasing costs. The idea is that from the end of skiing until dinner time people don't have much to do, especially families who aren't likely to sit in bars or be interested in noisy aprés-ski (not that Les Arcs has much of that!). So rather than retreating to their apartments, get them out with memorable things to do and, most importantly, get them to spend more money.  The increasing accommodation infrastructure at Arc 1800, including the massive Alpage de Chantel project (which will, when finished, increase the number of beds by 40%),  justifies substantial improvement in piste-side equipment and will provide a large captive market for innovative new attractions. 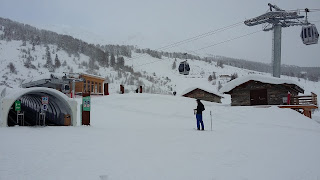 Perhaps the most tangible benefits of Mille 8 have been the three new replacement lifts - Villards, which really only services the Mille Huit activities. Dahu provide pedestrian uplift to the new Chantel development and the new Carreley chairlift eases theVagere  bottleneck with quick access to the Col de Frettes, once the destination of the old Arc 1600 'Arpette' lift. The old, slow Villards and Chantel chairlifts, which date back to the 1970s, have gone, and overall there has been a significant net increase in uplift.

Mille 8 occupies a formerly wooded area just above resort, which was deliberately left in tact when Arc 1800 was built in an attempt to integrate natural features of the mountain with the harsher 'urban' resort. This had been successfully achieved in Courchevel 1850 some years earlier (Roger Godino, co founder of Les Arcs, described the resort as the 'sister' of Courchevel). Some older pre-resort buildings have been pleasingly renovated and incorporated into the new infrastructure, mainly as golf schools (more about golf later..).

The main snow-accessed features are:

Le Luge - a 1 km tobbogan run
Le Cube - beginners area at the top with covered moving carpet lift
Les Bosses - a short bump run featuring and ingenious video system that allows you to receive a short film of your descent on your smartphone
Les Cabanes - various nicely built huts and terraces, for star-gazing, barbecues, sun-bathing, etc. There's a misnamed  musical instrument at the bottom called 'Le Xylophone' which is in fact a giant glockenspiel (metal not wood) which you can 'play' with your ski poles.
There is also apparently a pedestrian path, Les Sapins, but I couldn't see any signs for it and I'd no idea where is started.

However, the most impressive features are the 'Le Piscine' and 'Le Lodge', which could both be located anywhere and really have nothing to do with snow or snow-sports.

Access to Le Piscine is via a starkly impressive entrance tunnel and external lift tower. But, as with all of the Mille 8 attractions, it's necessary to trudge up the steep and icy slope in front of the Villards 'snow-front', and to cross a dangerously  fast-flowing piste to reach the entrance. I absolutely fail to see why the lift couldn't have just descended another 5 to 6 metres to the same level as the snow-front, giving safe and level access. I'm sure this in itself would increase the numbers of Mille 8 evening visitors, looking for something more interesting to do than mooching around Sherpa...

Le Piscine contains a nice, but rather small leisure pool (although actual swimming is not possible) with an impressive rock tunnel as its centrepiece. There are a couple of short water-slides (set apart from the pool itself), and various jets, fountains and waves in the pool.  Adjoining this is a suite of two saunas (one with a large window giving a great view of the setting sun),  two large steam-rooms and a pleasant 'chill-out' room with free ginger flavoured mineral water on tap. It's all very nicely done and well thought-out, despite all being on rather a small-scale. What a pity the Mille 8 planners didn't think to include the pre-existing outside swimming pool, such as you can find at Plagne Bellecote, Morzine, Les Deux Alpes, etc. Swimming in the open air in a warm pool while it's snowing is a truly wonderful experience!

For me, the jewel in the crown of Mille 8 has to be Le Lodge, a stunning, curvaceous building truly in the 'Arcadien' style, with sloping roof, timber abutments, laminated cladding, and brilliant asymetrical windows - Bernard Taillefer would definitely be proud of this modern interpretation of his innovative style. Within Le Lodge there is a large (up to 600 places) rather up-scale restaurant, including a beautiful relaxation area with rather wacky sofas and cushions. A patissier openly makes deserts to order, and there is in encyclopaedic wine list from a stroll-through cellar. The menu is fairly typical of many higher-end establishments in Les Arcs, and there are menus from €37 for three courses. It's worth it for the views alone, those almost entirely glass walls giving stunning views in all directions.  The restaurant also has private dining rooms, with less enjoyable views across to the muddled and ugly buildings of the Chantel development. Below there is a large conference room and further dining space where concerts and entertainments take place several times a week.
But Le Lodge contains more than its eponymous restaurant: at the other end of the gastronomic scale is the annoyingly cutlery-and-crockery-free 'Le Snack' (also referred to as 'Le Café') where everything is plastic and disposable (probably even the weird plastic stools which are the only seating available) but the 'Burger Savoyard' I ate was surprisingly good (just as well at  €13!). It seems such a shame that the attention to environmental and aesthetic detail evident elsewhere in Mille 8 is seriously lacking in this rather grim spot.

Upstairs there is an attractive showroom full of pretty hats - enticing it is, but just around the corner is a clue to another aspect of the rationale behind Mille 8. Golf is certainly not my game, but I couldn't fail to be impressed by  the life-size golf simulator, enabling virtual play on any of the world's leading courses (not, sadly including the one all around us here at Arc 1800) whilst analysing and improving your stroke. It was explained to me by the charming and US-English fluent manager that in the summer this part of Le Lodge will be the golf  'clubhouse' and the restaurant will provide for the summer golfers' needs.  This emphasis on golf makes the location of Le Lodge (and some of the other non-snow features of Mille 8) seem more logical: encouraging the summer market is obviously as important an aim as filling the '4 'till 7' gap.

However, I am interested in Mille 8 for what it brings to our world of snow and skiing. Will it really create  those 'unmissable moments' claimed in the flyer to tired families prepared to fork out €6 euros per child for a three-minute fairly slow toboggan  run, a further €8 per adult to visit the Le Piscine (sauna and steam room are extra) and a couple of hundred euros on a gastronomic meal in awesome surroundings? I certainly think more, if not all, of the attractions should be included in the lift pass: the extra expense is bound to put a lot of people off, along with the difficulty of access referred to earlier.

Mille 8 as a concept perhaps reveals  something of the hidden agenda of ADS (the company that operates Les Arcs and has made most of this investment). The many millions of euros spent on Mille 8 could equally have been used to add or further improve the  traditional skiing infrastructure (queuing for 45 minutes to get on the Arcabulle lift at Arc 2000 is certainly not an 'unmissable moment'!) and to encourage more and better skiing, and a wider appreciation of the unique environment we are in. 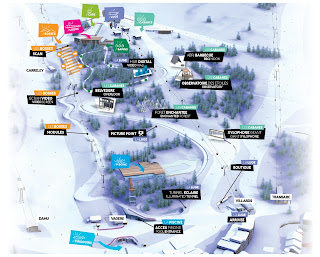 Mille 8 is something of the opposite, a kind of  microcosmic theme-park-on-the-snow, with artificial features, impressive though many of them are, at its heart rather than any sense of harmony with the mountain it sits upon. The original publicity for Mille 8 described the project as something like the 'distillation of the spriit of Les Arcs'. I fear in fact the opposite my be true, but perhaps we have to accept the world had moved on from the guiding inspiration of Robert Blanc and Roger Godino all those years ago.

The friendly hat and golf simulator manager summed it up nicely, 'Mille 8  is all about leisure', she said. Leisure rather than adventure, perhaps.
Useful links: